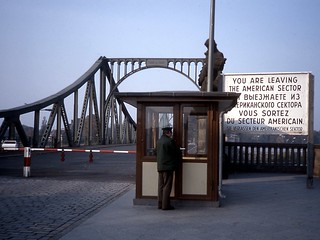 In Stephen Spielberg’s movie Bridge of Spies, Tom Hanks portrayed Jim Donovan, an attorney who engaged in an historical negotiation. During the Cold War, Jim was enlisted by the CIA to be the negotiator in an exchange of accused spies. This exchange took place on the Glienicke Bridge spanning between East Germany and West Berlin. However, before the prisoner exchange occurred, Jim had to enter into negotiations with the USSR and East Germany. These negotiations had a frosty start.

As portrayed in the movie, the negotiations were preceded by Jim’s sleeping in a damp and cold cottage on the outskirts of West Berlin, instead of in a welcoming and warm hotel. On February 3, 1962, the day Jim was to make contact with his Soviet counterpart, he walked alone through the icy streets of East Berlin, only to be robbed of his overcoat before finding his way in the snow to the Soviet embassy. There, while trying to regain his composure and warmth, he was accosted by a cacophony of confusion from three KGB imposters who claimed to be the relatives of Rudolph Abel, the accused Soviet spy. Jim quickly realized that the clamorous family was fake. While Jim needed to overcome his body’s chill, he did not lose his cool as a negotiator.

Pre-mediation conference call is a warm up for negotiation

This movie scene illustrates the importance of pre-mediation conference calls. The purpose of having a phone call with a mediator is to remove as much uncertainty about the negotiation process as possible before the mediation begins. In the movie, Jim would have benefited from a call with a mediator to at least discuss with whom he was negotiating, confirm the exact time and place of the meeting, and receive specific directions to the conference room.

Advice from JFK about difficult negotiations

While we are thinking about the Cold War, it’s good to remember a quote from John F. Kennedy, who was president during Jim’s negotiations. JFK admonished the nation in his inaugural address:

Just as the Glienicke Bridge spanned the Havel River between West Berlin and East Germany, mediation is a process that can help parties span the dispute that is between them. Because the process is voluntary, even if a court orders parties to mediation, they don’t have to settle. To take JFK’s advice, knowing that you have control over your negotiated decisions, you don’t need to enter into mediation in fear. Nevertheless, because mediation is a confidential process that enables you and the other party to make informed decisions, you also don’t need to fear offering proposals that meet your needs. It’s as good a time as any to imitate Jim Donovan’s savvy determination to reach an agreement that you can live with and that puts the dispute behind you.